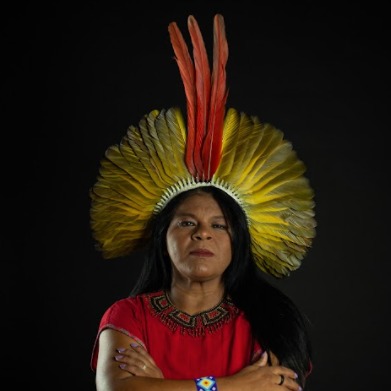 Sônia Guajajara is from the Guajajara/Tentehar people, originally from the Araribóia´s indigenous land, in the state of Maranhão, Brazil. She was born in 1974 to illiterate parents. She is the mother of three children. She left her state for the first time at age 15, when she was invited to attend high school in the state of Minas Gerais, southeast. Afterwards, she returned to Maranhão, where she graduated in Literature and Nursing, and a post graduation degree in Special Education.

Her indigenous and environmental activism started when she was young, in grassroots movements. She soon gained national recognition, becoming vice president of COIAB (Coordination of the Indigenous Organizations of the Brazilian Amazon), and then executive coordinator of APIB (Articulation of Indigenous Peoples of Brazil) for the Amazon.

Since then, Sonia Guajajara has been one of the main leaders on the front line against a series of projects that attack rights and threaten the lives of indigenous peoples and the environment. She gained international recognition due to dozens of complaints about violations of indigenous rights made in different instances of the UN, the European Parliament and the World Climate Conferences (COP), from 2009 to 2021. Sonia traveled to more than 30 countries around the world exposing the violence against indigenous peoples and Brazilian forests.

In 2018, she was the first indigenous person to run in a president ballot in Brazil and continues to articulate the participation and protagonism of indigenous women on various fronts of struggle.
In 2019, she co-organized the First March of Indigenous Women in Brasília, bringing together more than 2,000 women from the most diverse peoples (more diverse ethnicities). The march culminated in the foundation of ANMIGA – The National Articulation of Indigenous Women Ancestrality Warriors, a national reference organization that mobilizes indigenous women from all Brazil’s biomes.

Also in 2019, she led a campaign Indigenous Blood – Not a Single Drop More, which, together with 9 other APIB indigenous leaders, travelled around 12 European countries, taking complaints about violations perpetrated by the Bolsonaro government, as well as demanding measures that put pressure on the Brazilian government and agribusiness companies to comply with environmental preservation agreements and respect for the rights of indigenous peoples, which Brazil is a signatory.
Due to the pandemic and following the international health guidelines of social isolation, she coordinated through the Articulation of the Indigenous Peoples of Brazil (Apib) and the organizations that are part of the National Indigenous Mobilization (MNI) to carry out the ATL (Acampamento Terra Livre) in a virtual mode and in networks. She also led online assemblies and the preparation of the Indigenous Emergency Plan carried out by APIB.

Sônia Guajajara has already received several awards and honour, such as the 2015 Order of Cultural Merit Award from the Ministry of Culture, given by then President Dilma Rousseff. She was also awarded the Medal 18 de Janeiro by the Padre Josimo Center for the Promotion of Citizenship and Defense of Human Rights, in 2015, and the Medal of Honour to Merit from the Government of the State of Maranhão, for the great articulation with government bodies during the period of fires in the Araribóia Indigenous Land.
In 2019, she received the João Canuto Award for the Human Rights of the Amazon and Freedom, by the Human Rights Movement Organization and also the Packard Award granted by the World Commission on protected areas of the International Union for Conservation of Nature (IUCN).

Today she is part of the Executive Coordination of the Articulation of Indigenous Peoples of Brazil (APIB), ending her second term (2013/2017) (2017/2022). She is also a member of the Board of the Interfaith Initiative for the Tropical Forests of Brazil, an initiative that is part of a United Nations Program. 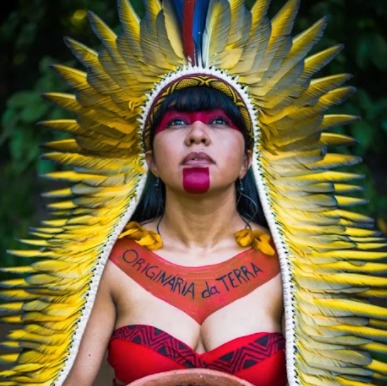 My name is Célia Xakriabá, of the Xakriabá people, I define myself as an activist, a member of the National League of Indigenous Women, from the Cerrado scrublands, though we defend all Brazilian biomes equally.

I work on multiple fronts, as a representative of indigenous peoples and women, as a lecturer and parliamentary aide to Áurea Carolina. I have a master’s degree in Sustainable Development, obtained from the University of Brasília’s Professional Master’s Degree Program in Sustainability among Traditional Peoples and Territories. I’m currently studying for a doctorate in Anthropology from the Federal University of Minas Gerais.

I am the first indigenous woman to have a podcast on Globoplay, dealing with indigenous matters. We, the indigenous peoples, want to stake out and occupy various territories, on land and on screens using digital and ancestral technologies, because it’s not about what things do to us, but what we do with things. We want re-signification, to avoid acculturation and foster indigenization. 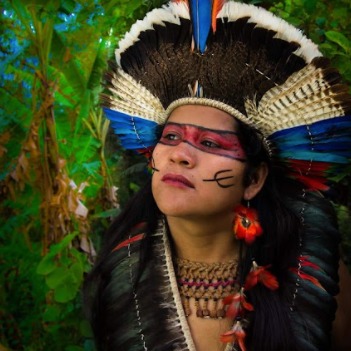 Kerexy Yxapyry is Mbya Guarani leader, Coordinator of the Guarani Yvyrupa Commission, an organization that works in the territorial defense of the Guarani People who lives in the Atlantic Forest – south and southeast of Brazil. She is the executive coordinator of The Articulation of Indigenous Peoples of Brazil(APIB), which is the largest national indigenous movement.

Co-founder of ANMIGA – The National Articulation of Indigenous Women Ancestrality Warriors. In her trajectory of struggle, she acted strongly for the ratification of the Morro dos Cavalos Indigenous Land and, also, in the field of education and environment. She is an environmental manager graduated from the Intercultural Indigenous Licentiate of the South, Atlantic Forest (Federal University of Santa Catarina), Master’s student in territorial planning and management at UDESC, Santa Catarina State University. Founder of the Tataendy Rupa Training Center. 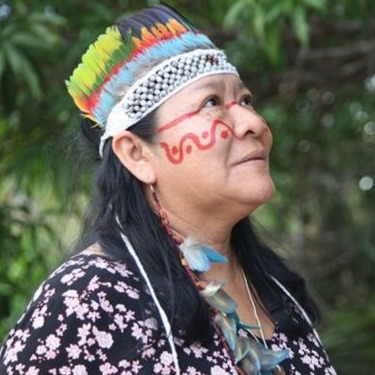 She was born in the Cabeceira do Truarú, an indigenous community located in the Murupú, in the municipality of Boa Vista. She is Wapishana (an Arawak ethnic group) and at the age of 8 years old, she left the community where she was born and moved with her mother to the urban area of Boa Vista. A native speaker of the Wapixana language, she learned Portuguese and became interested in studying in the capital of Roraima. After graduating from high school, she worked in an accounting company during the day, while studying law at night.

She graduated in 1997 from the Federal University of Roraima (UFRR) and at the University of Arizona, in the United States, he took a master’s degree.
She worked in the demarcation of the Raposa Serra do Sol (indigenous reserve), in addition to working in the legal department of the Indigenous Council of Roraima (CIR) and in defending the rights of Indians to the possession of their lands in the Northern Region of Brazil.

In 2013 she was the first president of Special Commission for the Defense of the Rights of Indigenous Peoples, created by OAB ( Brazilian Bar Association).
In 2004, she received the Reebok Award for her work in the defense of human rights. In 2010, she was awarded the Order of Cultural Merit from the Ministry of Culture. In the 2018 elections, she was elected to the Chamber of Deputies by Roraima, by Rede Sustentabilidade. She received the United Nations (UN) Human Rights Award in 2018.